The last month or so has been pretty hectic both at work and in my personal life - but rather than make excuses or promise to blog more frequently, I'll instead just post a grab bag of random tidbits I've learned / come across this month.

First Screenshot of the Windows Phone 7 Launch Screen in Landscape 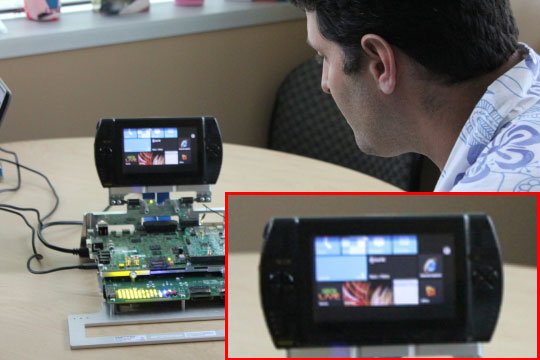 Having played with the hacked emulator quite a bit I'd grown concerned at how few apps so far supported landscape orientation - including the main launch screen of the phone. I am pretty sure that this screenshot above is the first shot of the launch screen running landscape, which is nice to see. I am very hopeful that the WP7 team might update their Windows Phone 7 Series UI Design & Interaction Guide to discuss more about landscape orientations, and that more videos or screenshots might come out showing how native apps will handle this orientation.

Some New Understandings about the Visual State Manager in Silverlight
Two of the biggest issues I'd run into using the Visual State Manager was the inability to know when a state transition had completed, and the ability to query the current visual state. Thanks to this month's presentation at the Atlanta Silverlight Meetup by James Chittenden I now know the solution to both of these issues.

It turns out that in Silverlight 3 you actually CAN tell when a visual state transition has completed. I had asked around to several folks about this, so apparently I wasn't the only one in the dark on this ability. It is actually very simple. Supposing that the name of your visual state is 'MyState', attaching a completed event is as simple as attaching a completed event to the relative Storyboard:

Windows Phone 7 Development Continues...
Finally, I just wanted to point out that I am still working on Windows Phone 7 applications - both at work, and in my personal time. Brandon Watson and others have recently commented that developer devices will start rolling out in July, and that those who want a test device need to be showing off their work. I hope to post some information as to the initial apps/games I hope to have in the marketplace on launch soon - and if you want an early test device, I suggest you do the same.